ATTACK OF THE TITANS SEASON 4 : REVIEW OF EPISODE 7

Episode 7 finally came out after a cliffhanger leaving us in the middle of an incredible fight. As agreed the fight of Eren and the other members of the exploration battalion against the Mahr and their various titans is at the center of this episode that could be classified as half-tone.

Indeed the skill of the narrator emerges in this episode since the whole beginning of this season making understand and appreciate the Mahr leaves today a bitter taste in front of the distress of Falco and Gabi.

This episode 7 is a great upheaval, all the morals and the vision of things that the author had instilled in the previous seasons is turned upside down. Eren is shown to be as determined as he is violent, not hesitating to dismember the Jaw Titan and then use it to destroy the cocoon in which the Hammer Titan has locked himself.

Outside the battlefield we find Armin who had foreseen the arrival of the Mahr battleship fleet and took advantage of the opportunity to destroy them all at once with his Colossal Titan, whose appearance is similar to a nuclear bomb, minus the radiation. Armin will experience the terrifying vision of the bearer of the Colossal Titan, the one Bertold had, that of children dying as a result of his power.

A vision that does not seem to traumatize him more than that, which makes the spectator emotionally closer to the Mahr faction than to the "Demons of Paradise". Whether in combat or in tactics, the Exploration Battalion is victorious on almost every point. Eren has devoured the Hammer Titan and thus inherits its power. The technology developed over the last hundred years by the inhabitants of the Isle of Paradise has proven its effectiveness by bringing down Porco, Peak and Sieg, holders of the Jaw Titan, the Cart Titan and the Bestial Titan. Thus the only person left to stand up to the "Demons of Paradise" is Reiner who remained unconscious throughout the episode before materializing an incomplete Battleship Titan. On the other hand, we note that the Exploration Battalion has also planned its means of extraction having taken control of the first airship of the Mahr nation and use it to prepare their escape after having marked the ground beforehand, however a detail is intriguing, a black person drives the airship while there are no blacks among the Eldians, this implies cooperation with the "supporters of the shadows" about which Tyber spoke two episodes earlier. 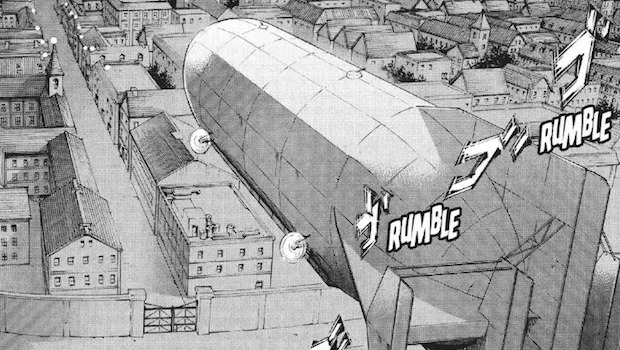 In view of the current situation one supposes that the coming of Reiner should prevent the Jaw Titan from being devoured by Eren, however he seems very weak in his state in front of Eren who is not only in full form but takes advantage in addition to his newly acquired powers, this will certainly result in a defeat of Reiner.

TO CONTINUE IN THE PASSION

To complete your collection, take a look at our ATTACK ON TITAN LIVAI FIGURINE, the main asset of the Paradise Island. Relax after a hard day in which you have fought titans with your THE SURVEY CORPS SWEATSHIRT.