ATTACK OF THE TITANS SEASON 4 : REVIEW OF EPISODE 6

We meet again today for a new weekly review of the Attack of the Titans, while we are only at the beginning of the season, this one having to contain between 25 and 36 episodes, the hostilities have already been launched. The last episode left us on the arrival of Eren in the middle of Willy Tyber's speech, making a parallel with the attack of Reiner and Berthold at the origin of the series.

WILLY HAD IT ALL PLANNED.

Willy Tyber had indeed foreseen Eren's arrival, or at least his eventuality, he knew that if an attack was to come from the Paradise Island, it would be during his speech. That's why he worked to bring the different world leaders together at the same point, because at the same time they would take into account the threat that Eren is. We expected no less from Willy Tyber, the secret chief eldian of the Mahr Empire.

However, this genius politician is dead, devoured by Eren, something for which he was certainly prepared but which will still be a hard blow for Mahr. One can easily assume that Eren is aware of the consequences of his action to Tyber's speech and that he too has a tactical advantage up his sleeve. The only thing that is certain is that Eren will always keep moving forward.

THE HAMMER ENTERS THE SCENE.

As we had assumed, it was not Willy Tyber but the brown woman who owned the Titan Hammer. This woman, who is none other than Willy Tyber's sister, will attack Eren with weapons created by hardening, something that will almost defeat Eren, except with the intervention of Mikasa who will save him in extremis.

However, it didn't take long for Eren to understand how the Hammer works, as it can be trained remotely while maintaining wired contact with it. Eren will have no difficulty in getting this wire up to the Hammer Titan before being interrupted by the Porco Jaw Titan itself interrupted by Captain Livai. 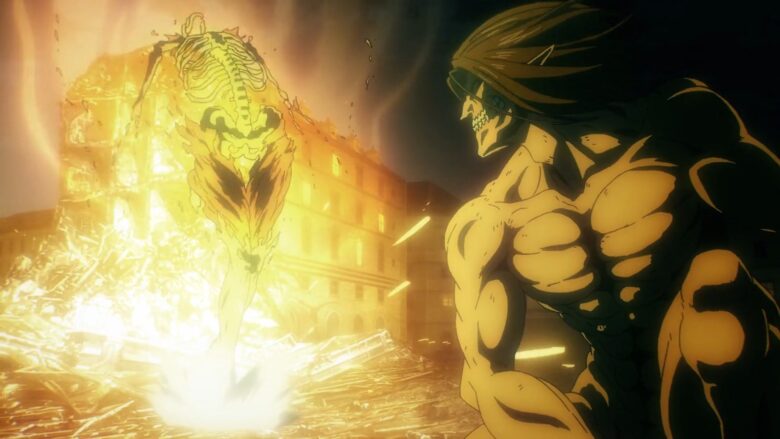 What's next ? Will Porco die at the hands of Livai ? Does Eren have an asset to counter the alliance of the world ?

TO CONTINUE IN THE PASSION :

Find our figurines of CAPTAIN  LIVAI to complete your collection. Wear this "GOLD" ATTACK ON TITAN SWEATSHIRT and scare off the titans.